The Mad Bastard Scooter Rally is a thoroughly silly event - comical even. You dress up in ridiculous outfits, decorate your scooters and ride the under-powered machines in a crazed fashion across distances and in places that really are not suited for small wheeled, small displacement vehicles.

It's crazy - and yet it changed my life in several very important ways.

And I have one person to thank for it in ways I quite tragically and literally cannot repay - Rob Harris.

Up until the time of my first MBSR rally, I was a rider around the Toronto area - I really didn't venture very far from home. I was however an avid reader of motorcycle adventures - in Canada Moto Guide and elsewhere.

Probably the furthest I had ventured on my machine up to that point was Kingston, on side roads and taking far too much time and being far too timid. I mean, it was a scooter, right? I was pushing the boundaries of what was possible - you kept hearing how you really couldn't take them out of downtown, and taking them out of a parking lot was sheer lunacy.

And then I read about the first MBSR, with Rob Harris and compatriots taking 50cc Honda Ruckus scooters around a great lake, and my world changed. 2004 MBSR Rally

I realized it wasn't about the machine - it was about the rider, about the experience, about throwing pride and common sense out the window and having an adventure - regardless of what the armchair experts told you was possible, practical, or doable. 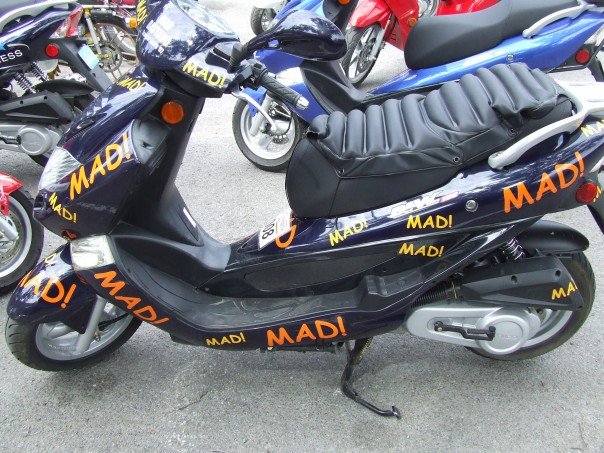 We decorated the machines with stickers (in my case saying "MAD! MAD! MAD!" and in her case "RUNNING WITH SCISSORS!" which caused her to be mistaken for an advertisement for a hair cutting place.)

We went from the starting point up to Ottawa and back around and down to Belleville. We took 12 hours to do the event - skipping the optional loop as we were exhausted. But we had made it - we did more distance that day than we had ever done before. We were taken through some gorgeous side roads, felt like explorers, felt challenged and felt part of a mad, crazy, wonderful group that were all together in an adventure.

The next rally I decided to go all out and rode it on a Tomos moped. It was of course the year that Rob decided we'd take a hugely steep hill (Foymont road) and I got to experience my moped coming to a complete stop while at full throttle - I simply ran out of power, and had to push the bike while running beside it.

We nearly got hypothermia, I got bad gas and stalled several times, we got lost and I'm pretty sure the locals in one town called the OPP on us when we rode through several times in the middle of the night looking for the right way to go. All in all it took me 21 hours on the moped - and my wife got a DNF because she stuck with me while riding her 250cc. (Which gets less time to finish.)

That was also the year that Rob asked people to do some blogs on CMG - which gave me a chance to write up some of my preparation.

When the rally was done - I wrote up an article and Rob ended up publishing it in CMG. 2009 MBSR - A Rider's Perspective

Next thing you knew, I was doing scooter reviews. (I suspect at least partly as the full time writers didn't really enjoy testing scooters for the most part, but I did genuinely enjoy testing the smaller machines. Especially as most of my riding is commuting in the city, where a 125-300cc machine really comes into its' own.)

I had a range of experiences while doing articles for Rob and CMG - things I wouldn't have the opportunity to do otherwise. Also various situations like drunken phone calls from an angry motorcycle dealer, a loaner bike malfunction in the bug infested middle of nowhere, and having the occasional moment during a test ride that strongly resembled the movie Deliverance.

For the 2015 rally, Rob decided to sell the MBSR rally to Kymco - something that was understandable given the rally had grown each year and was becoming more and more of a handful to manage.

The Monday after the rally I got a phone call from him - we talked over the rally, about my writing a report on it again. He talked a bit about how torn he was - on one hand the MBSR had become a huge amount of work, and he was glad to have a break from it - but on the other hand it was something that was very close to him and that he felt a certain sense of ownership for.

He'd stayed away from the 2015 rally to give Kymco a chance to run things without worrying about the "former ownership" - but he was at least toying with the idea of riding the 2017 rally and once again enjoying things from the seat of an underpowered, silly little machine.

Unfortunately - Rob passed away in 2016. Which was a blow to many people - his family, his friends, and the motorcycling community as a whole.

I'd actually been pondering not doing the 2017 rally myself - it takes a bit of preparation, the expense, and just the usual question about if I was up for abusing myself once again for the sake of silliness.

But now, there wasn't a question. I'd be there. And I'd be dedicating my ride to Rob. He'll be a part of the ride, he'll be along in spirit on this thing that he created.

Because sometimes the silly little things in life are the most important things of all.

Rob Harris taught me that, while making me a better rider, a better writer, and quite likely by example a better person.

Submitted comments will be subject to moderation before being displayed.