This is from a year and a half ago and has been posted elsewhere... but I thought I would put it up here as well. (Seeing as we did half the trip on a sidecar motorcycle.)

A wrong turn took us onto a rally course the day before the race - with high end modified cars whipping by us on the narrow roads.

Another random turn took us to what we thought was a park, where we climbed 10th century castle ruins and stood where centuries of feet had walked.

We had dinner in a half ruined chateau, served by a Baron and Baroness in a vaulted stone room lit by a series of disco lights.

We even toured with some guys, who kept pointing out church steeples they'd blown up and bridges they'd launched rockets into.

And all this happened because my grandmother asked us for a favour......
Top

The favour involved my grandfather. I've written before about Jack, my grandfather who was a despatch rider during WW2. But this time I'm referring to Bob, my mother's father - who was a Typhoon pilot during the war.

Every few years for the last while, the remaining pilots get together for a trip - heading overseas to see places they were stationed and visit old friends. My grandfather, along with my grandmother Pearl, would go along for the trip.

My grandfather passed away a little while ago - but the pilots invited my grandmother (herself a vet, Code and Cipher division) to go along. Last time one of my cousins went with her, but this time she asked if my wife, Cindy, and myself would go along for the trip.

And after that realization..... who could resist going?
Top So the plan was... first we'd spend a week in Provence in a rented sidecar rig.... getting thoroughly lost and mangling the french language whenever possible. (And I must say, in my experience the French people are quite good about putting up with what must be an acutely painful rendition of a beautiful language by yours truly.)

After the week in Provence, we'd go back up to Paris - spend a day there and then meet up with the WW2 pilots and head off to Normandy for a week of ceremony, wine and cheese parties, and touring various sites.

The bike to be rented would be from http://www.cbesprit.com/ - a rental place in St. Remy de Provence.

(To be continued)
Top

Typhoon pilots were a special breed during WW2 - originally designed as a medium to high altitude interceptor (and a replacement for the Hurricane) - the typhoon never really fit well into this role. It was eventually to find it's true niche as a ground attack plane - fitted with cannons, bombs and rockets and performing low level attacks.

This was never a safe plane to fly - plagued from the early days with carbon dioxide leaking into the cockpit (a problem never entirely resolved, and throughout it's service life pilots were advised to keep on oxygen at all times while operating the aircraft.) - it flew at low altitudes and attracted more than it's share of enemy fire. This wasn't even considering the risks involved with ground attack - to aim the bombs, you pointed the plane at the target.... on the ground.... diving down and the occasional unwary pilot was even known to be downed by the shrapnel from his own bombs.

And yet, out of all the planes my grandfather flew (and since he was in from the very early days of the war, he flew several) this was his favourite.

And I was going to be able to see some of the same places he saw - with the very same gentlemen whom he flew with. (And with my grandmother as well - herself someone I am intensely proud of. She served in both transportation services and code and cipher, raised a large family while working in the corporate world in sales (herself pushing the boundaries of what was acceptible for women at the time.)
Top

We'd made the decision to pay a bit extra to get access to the Air Canada lounge on both ends (we'd be returning with my Grandmother... and really we did it for her comfort. Not for the comfy chairs, internet access, or buffet... nope...)

Getting onto a plane, knowing the other end of that flight was across an ocean, speaking a different language - with different laws, customs and history.... quite a sobering thought really.
Top

Landing though showed that.... well an airport is an airport. No matter in what country, there's still a sweaty guy in the bench seat next to you - even if he does mumble in a different language. (Though to be honest, most of the guys I seem to end up sitting next to... I think they speak their own language no matter where they are.)

We hopped on the high speed train, leaving the airport and heading to the south of France - to Provence, and our home for the next week. Even blurred by speed.... France is quite the beautiful place.

Our "Maison" - not quite a hotel, it's more like a weekly apartment. (You get towels and such to last a week, you don't get daily maid and cleanup service.) After having arrived, dumped off the luggage - we headed out to get the Ural from Classic Bikes Esprit (and I VERY highly recommend them btw if you ever happen to find yourself in southern France looking for a bike rental... absolutely wonderful folks to deal with, and helpful with way more than just providing a machine.)

They had a lot more than just our Ural rental there - from Royal Enfields, to classic bikes. You can go on a group tour with a classic english vintage machine, or go off with a Ural sidecar (with a mandatory training day if you haven't done a sidecar before.) or rent something more modern as well. First thing I noticed is that..... all of Provence is basically like a park. It's sculpted, beautiful... and even the occasional ruined building had more of a feel of genteel and graceful decay. There is nothing that feels really "wild" like there is here

We started off by really just getting lost - and this because the theme for the trip. Most of the time we'd have just one or two things recommend by CBesprit, and then half the rest of the day we'd point in a direction and go. The GPS was used to get us back home (Necessary, as St. Remy, as is common with many older villages in France, is not exactly laid out in an easy to understand grid. Try streets turning into alleys. Odd one way combinations and sometimes having to backtrack several times to find exactly the right route. It's easy enough finding your way through a village - but finding a particular street address can sometimes be a challenge.
Top

One place we stumbled across... quite accidentally.... was a medieval village called Oppede.

Tiny cramped streets, a winter that casts long shadows from the mountain next to the village and various societal changes made this village shrink, eventually resulting in it's being abandoned entirely in the 19th century.

In 1940 it was reoccupied by a commune of artists - causing people to move back into the abandoned houses. (From which the roofs had been removed to avoid paying property taxes.)

And you start to see a little bit more than just a parking lot.... Many of the houses in the oldest part of the village are little more than shells.... (with a few exceptions)

This car is proof that French drivers are better than ours. Picture a path... too rocky and steep to be called a road really.... which is difficult to WALK up. Then picture a tiny little street car driving up said road.... the remains of cobblestones and deep droves where rain had washed away stone over the years... then picture it likely having to drive up BACKWARDS to get up there and park. (I didn't see how it could turn around in the space it had.) Quite the hike up to the top.... with the ruined castle stitting up there. Still watching over the valley... a toothless stone giant... still majestic in its' ruined state. 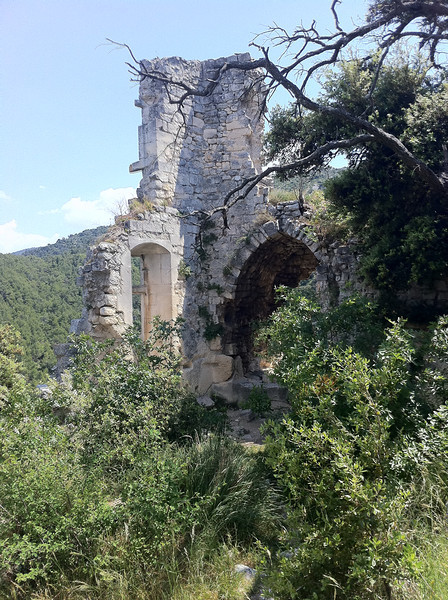 You know... some of the towns in Provence are just a little on the spectacular side..... for example.... The roads there are narrow, twisty, tree lined and gorgeous. IF a touch.... scary at times if you are used to the lane size here. In Provence you from twisty valleys to open fields to high ridges and curving roads cut into the side of hills and cliffs.

We were driving along at one point... picking roads through feel... when we noticed something odd. All along the road we were on, there were banners... warn off tape - sectioned off areas.
It wasn't until we saw a few signs that we realized that the road was going to be blocked off for a rally course... tomorrow.

This wouldn't have been scary in and of itself.... except all the rallycars were arriving into the village behind us for the race the next day.

In other words... they were coming into town, and we were leaving it.

On a very very narrow road, so twisty that you wouldn't be able to walk 50 feet in a straight line.

And rallycars drivers..... even when not on the rally.... they don't drive slow.

Ever have a porsche pass within 6 inches of you on a curve at a combined head on speed of around 160kph?

Fortunately we didn't have a seat-cleaning deposit on the rented Ural.